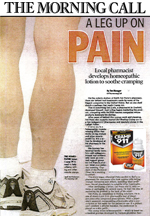 The developers of Cramp 911 — a first-of-its-kind topical muscle relaxer — wanted to take its new product into pharmacies nationally. But the first step was to launch it in their local region, an effort that was key to measuring the potential success of the product and in driving sales. With virtually no advertising, the product’s success rested on a public relations effort by Kimball Hughes Public Relations.

The results? A page one feature in the lifestyle section of the area’s leading daily newspaper — as well as radio and television coverage — drove tremendous sales at the dozen local pharmacies that carried the product and gave the company the boost it needed to take the product launch to the next phase. As an added bonus, when the newspaper feature was picked up by sister publications across the country, the company’s web sales spiked upward.

Vectrix rides across the country