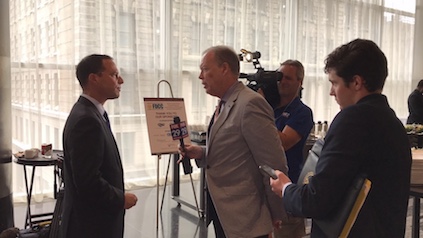 The Challenge
The Federation of Defense and Corporate Counsel (FDCC) hosts an annual Corporate Council Symposium in Philadelphia for its exclusive membership. The event’s programming focuses on continuing legal education, legal technology training and updates, ethics, trends, compliance issues and a host of other matters.

Kimball Hughes PR was tasked with securing local and trade media coverage for the conference which features highly specialized legal topics for an audience that was part of an exclusive, members-only organization.

As a result, not only did the local affiliates for ABC, CBS, NBC and FOX send camera crews to cover the speech, but American Lawyer Media – the dominant trade outlet in the legal marketplace – dispatched a reporter. While most coverage focused on the attorney general, FDCC signage was featured prominently on broadcast news and the association’s name was used in introducing the story. Since the story was rebroadcast on several segments over the next 24 hours, FDCC received significant media exposure which significantly raised the organization’s otherwise low-profile in the tri-state area. Additionally, media coverage of the Symposium was repurposed across all FDCC’s social media channels and shared with prospective members.

Days of wine and lawsuits

When the New Jersey Turnpike Authority turned on Old York Cellars, a small Garden State winery, claiming one of the winery’s product lines implied NJTA was endorsing drinking and driving, the winery tried to satisfy NJTA. At great expense, Old York Cellars changed its design and packaging under the guidelines NJTA provided. When the NJTA returned with even more demands for further changes and another expensive round of redesigns and repackaging as well as threats of expensive legal action, Old York Cellars decided to fight back. Continue reading→